When it comes to hair loss and seeking hair growth, the case is that both men and women throw a huge amount of time, money and effort into seeking a real solution.

It is an industry worth billions each year, covering everything from the proven to the wildly unlikely. But whatever the solution to reversing hair loss, you can bet someone wants you to part with your cash.

But one tantalizingly low cost possibility that is exciting people is using emu oil for hair growth.

Why? Well, alongside the usual anecdotal success stories across the Internet, is a growing noise from reputable companies and researchers backing up the claims. A team of Austrian inventors has even isolated a component of emu oil and patented it for the purpose of hair growth, so something seems to be ringing true in the claims.

So let’s take a look at what’s causing the buzz around emu oil for hair and investigate how much potential it has to help with regaining hair and reclaiming confidence.

Where Does Pure Emu Oil Come From?
There Is Evidence Emu Oil Helps With Hair Growth?
Science Is backing Emu Oil To Rejuvenate Hair Loss
So…What Sort Of Emu Oil Do I Need?
I Need This Stuff In My Life! Where Can I Buy Pure Emu Oil?
If You Don’t Believe That Emu Oil Can Stimulate Hair Regrowth…

Where Does Pure Emu Oil Come From? 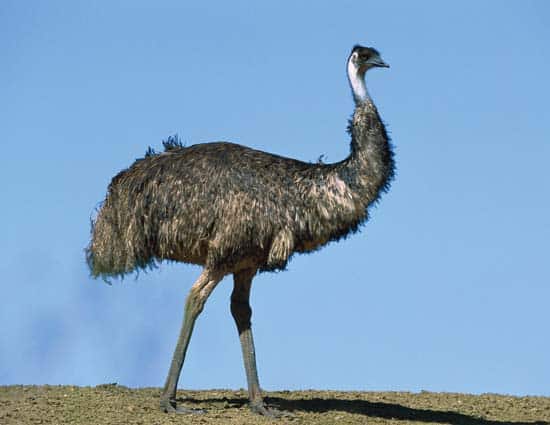 You may have already guessed, but emu oil comes from the flightless Australian bird of the same name. Alongside its cousin the ostrich, these huge birds are found in abundance across Australia, and are farmed for their meat, in the same way that cattle is.

Emu oil is contained within a thick pad of fat that is found on the back of the bird. This pad of fat apparently evolved because of the extreme temperature of the sun in that part of the world, helping to protect the body of the animal from the heat.

It is extracted when the emu is butchered for meat. The pad of fat is simply washed, ground down and then melted into an oil. Once this is done, it is then refined by filtering it. If done correctly it will be free from the formation of unnatural and unhealthy trans fatty acids and contain around 50% mono-unsaturated fatty acids.

Until recently, this processing of emu fat into an oil was not done for the purpose of stimulating hair growth, however. Emu oil has been used for years to treat a variety of issues, including soothing swelling and inflammation, reducing the appearance of scars, reducing stretch marks, relieving insect bites and treating skin disorders.

Pure emu oil comes from the thick pad of fat that is found on the back of the flightless Australian bird of the same name (see picture above).

There Is Evidence Emu Oil Helps With Hair Growth?

One of the key properties of emu oil is that it is a highly penetrating substance. It has an incredible ability to penetrate the stratum corneum barrier of the skin (the outermost layer). This is one of the reasons why teams specializing in hair regrowth products are starting to target emu oil, because of this penetrating ability.

On top of that, because it is a very good anti-inflammatory, it is increasingly believed that it may help to inhibit something called tumor necrosis factor alpha (tnf-a), and inflammatory trait that has been linked to male pattern balding.

When you add in that emu oil is unlikely to irritate, is a good moisturizer and lubricant, and skin nourisher you can begin to see why it might work.

But that’s not the truly big news about emu oil for hair growth.

Emu oil is starting to be investigated as a skin anti aging product. Because of its combination of saturated and unsaturated fatty acids, plus the fact it contains clotrimazole and hydrocortisone, it has been found to enhance the willingness of the upper layers of human skin to retain water and increase the thickness of healthy skin, which explains why it has been used for years to promote healing.

Emu oil can penetrate the stratum corneum barrier of the skin, is a very good anti-inflammatory and may help to inhibit tumor necrosis factor alpha (tnf-a) which is linked to male pattern balding.

A study by the Boston University School of medicine found through topical application over a two-week long period, in a double-blind study which used corn oil as the second blind substance, that remarkable results were evident.

Emu oil stimulated a 20% increase in the growth activity of the skin. The study also noted that not only was the skin thicker and healthier, but that hair follicles were visibly more robust.

The study was led by Prof Michael Hollick, who also remarkably noted that emu oil awakened 80% of studied hair follicles that had been asleep before the start of the study. The beginnings of hair growth were noted in these follicles.

Other scientists have found the same thing. Dr Margaret Craig-Schmidt, who is an associate professor at Auburn University has said that:

The high presence of oleic acid in emu oil may be one of the reasons that it is able to penetrate the skin to a large degree and at the same time be able to carry active compounds through the skin where they can have an effect in the body. (source)

So there is growing evidence that emu oil can nourish and repair the scalp, stimulate the hair follicles and potentially allow them to start hair regrowth.

In summary, the reasons that suggest that pure emu oil can helping to stimulate hair growth are:

But before you go galloping off to start hitting that click to buy button on any site you can find, it’s important that you know that all emu oil is not created equal, and some types will not work as well.

So…What Sort Of Emu Oil Do I Need?

The best emu oil to use is that which has been processed properly and simply. For a start, the emu needs to have been processed humanely, so that it is free from hormone, blood and meat residues.

If the oil is processed at too high a heat then trans fatty acids can be produced. These are not natural and will not be good for your scalp.

The emu oil should be free of solvent extractors during processing, so you’re looking for emu oil that contains no other substances. On top of that substances such as sodium hydroxide and other chemicals can be used to stop the oil clouding, but these, as well as trans fatty acids, can also remove or destroy phospholipids that are the key to how emu oil has such amazing penetrating properties.

Now I know that you’re not going to be able to sit there on Amazon or somewhere and ask all these questions, or do tons of research, but basically you should be looking to buy emu oil in as to ask if close to its raw natural state as possible, with the minimum processing.

The bottom line is that a reputable supplier with a great track record will use all natural means to find the emu oil, usually using clays to filter the oil for example. It’s not that complicated to check the label before buying, or to look at reviews, or the brand of emu oil you want to buy has been naturally refined and purified.

Try to buy a pure form of emu oil that contains no other substances and has been processed properly and simply.

I Need This Stuff In My Life! Where Can I Buy Pure Emu Oil?

The most obvious place to buy pure emu oil is Amazon. Whichever country you are in, there will be Amazon sellers who can supply emu oil to you.

Depending on your country you will also be able to quickly find specialist non-conventional medicine and home remedy outlets who can also supply the real deal, just pure emu oil.

Just to make sure you are getting the right stuff, you should check the following:

And the golden rule is if in doubt, send an email and also read the use of reviews, and don’t be afraid to ask a question.

Then the last point I’m going to make here is important.

Emu oil for kickstarting hair regrowth may still be unproven and in the early stages of exploration and analysis, but what is clear is that it can help to heal a damaged scalp.

It can help to heal inflamed skin, blisters and minimize conditions such as traction alopecia.

So even if you don’t believe that emu oil can help with hair regrowth, what is clear is that a healthy scalp will produce the best hair growth, and emu oil with its healing and nourishing properties will at the very least help you to keep the hair you have in good condition for longer.

Is It Worth Using Cocoa Butter For Hair Benefits?