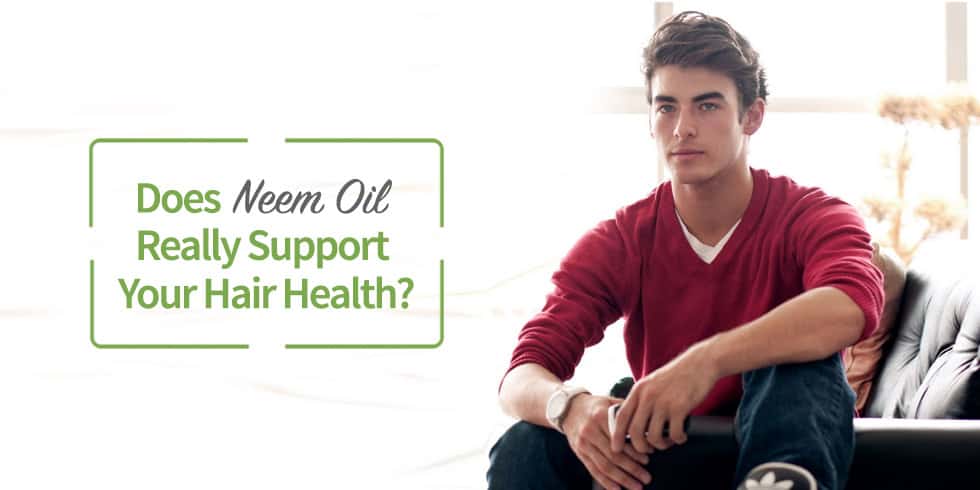 Herbal remedies and natural solutions to improve hair health and reduce hair loss, have a healthy scalp, the whole deal, have been around since mankind started worrying about losing their hair.

It’s one of the lesser-known natural remedies, when compared to other oils like coconut oil, but the truth is that neem oil for hair health is something that could have a basis of truth in the claims made around it. That’s why it’s growing in popularity as a natural remedy for poor scalp and hair condition.

It’s got a lot in common with other similar types of oil. For a start, the local people have used it for centuries to improve the health of their hair and skin.

Secondly, it is very much in vogue along with oils like argan oil, coconut oil and jojoba oil in recent years as a natural remedy, due to increasing scientific and anecdotal evidence about its benefits.

But there have also been some outlandish claims made around it, claiming it is basically a natural miracle cure for hair loss. So what’s the truth about neem oil for hair health? Do the claims stack up, and is it worth investing your time and money in trying it to improve the condition of your scalp and hair?

What Is Neem Oil?
How Is It Made?
What Does Neem Oil Contain?
Does Science Back-Up Any Neem Oil For Hair Health Claims?
How To Use Neem Oil On Your Hair & Scalp
Where To Buy Neem Oil

What Is Neem Oil?

Neem oil is the unknown cousin in comparison to other similar oils like coconut oil and jojoba oil. But it shares a lot of the same background in terms of how it has been used culturally, and in terms of its chemical composition and potential benefits.

The neem tree is a large, evergreen tree that is mostly native to India, although it also found in other parts of south-east Asia as well. Neem oil is pressed from the seeds and fruits of this tree, traditionally by hand.

We mentioned nectar in the title of this article for good reason. Translated, neem loosely means “sprinkler of nectar”. That should give you some idea about how it was viewed by the people who first extracted the oil and used it.

That name has come about because of its use as a traditional cure for dry scalp, poor hair health, psoriasis, dandruff, and even head lice, due to its properties as a natural pesticide.

How Is It Made?

There are two ways to extract neem oil from neem seed kernels. The first is to cold-press the seeds, literally crushing them to force the oil out.

The second way is to introduce heat, usually around 50°C of heat, to improve the extraction of the oil by making it warmer and more easy to extract. Some oils that will be marketed as cold-pressed actually use heat in the extraction process, but as the heat doesn’t do any damage to the composition it’s not a problem.

There is a third way of extracting neem oil that should be mentioned here as well. This involves solvent extraction, which in India uses a chemical called hexane. It is safe safe, and it benefits the manufacturer because it raises extraction rates from around 25% to around 50%, however the quality of this oil is lower.

What Does Neem Oil Contain?

When looking at the potential for neem oil to be beneficial to skin and hair health, you have to look at its chemical composition to see how the key components match up against other similar types of oil.

In terms of the main components in neem oil that have been linked to improving hair strength, health and growth, neem oil contains the following:

The various short-chain acids in neem oil have been linked to hair and scalp health in numerous studies with other types of oil, through strengthening the hair roots and soothing inflammation of the scalp.

It’s also rich in natural antioxidants, notably vitamin E. In line with the antioxidants in super foods like blueberries or spinach. It’s thought that applying these antioxidants topically can improve the efficiency of how they interact the scalp and hair.

Does Science Back-Up Any Neem Oil For Hair Health Claims?

Rather than just tell you that neem oil is brilliant, might be good, or is actually rubbish rubbish at helping strengthen your hair and scalp, it is important actually look at the facts of what it contains. Those ingredients can then be tied to positive scientific research into hair and skin health.

Having strong hair growth, and strong hair on the head is down to the health of the hair follicles, the quality of the nutrients reaching those follicles, and the condition the hair is kept in once it grows out of the follicle.

One of the main reasons people start to lose their hair is through unhealthy hair follicles. A lack of nutrients and inflammation can lead to the follicles starting to close up, producing thinner and more unhealthy hair, until eventually they stop producing hair at all.

So for neem oil to stand a chance of being beneficial it has to be a natural antioxidant. It does contain vitamin E.  Surprisingly, vitamin E was only discovered in 1922, but in numerous studies since it has been identified as a key natural antioxidant that has been proven to reduce the body’s natural inflammatory response when it goes too far.

Neem oil also contains the short chain fatty acids Omega 3 and 6.  These can also help to regulate an aggressive inflammatory response. The less inflamed the hair follicles, the less the hair coming out of it will be strangled. The short-chain fatty acids also help to reduce dryness in the skin and their presence in the body helps to reduce things like skin psoriasis and dandruff, both linked to deterioration of hair follicles.

There have been a myriad of scientific studies proving that these chemicals can benefit the hair and skin. There are now several studies focusing specifically on the composition of neem oil to achieve better health in the hair and skin through its properties. Studies such as this one highlight the potential antibacterial, antifungal, antioxidant and anti-inflammatory properties of neem oil, all of which reduce the impact of free radicals on hair and scalp health.

So it’s all great news it would appear, and it gets even better when you look at conditioning the hair.

Neem oil is a rich oil that is full of relevant short chain fatty acids and nutrients. This composition means that it is easily absorbed into the hair shafts, allowing it to not only nourish them, but also to coat and protect the hair shafts as well.

How To Use Neem Oil On Your Hair & Scalp

In terms of how to best use neem oil for hair health improvements, it’s recommended to use it within a carrier oil.

A carrier oil is another type of oil that is easier to apply. A lot of people use cheap coconut oil and mix in a small amount of neem oil. Another reason for doing this is that neem has quite a strong smell that some people don’t like, so by mixing it in with coconut oil you can partly bypass that problem.

At room temperature, much like coconut oil, neem oil is a solid. This is due to the high percentage of short-chain fatty acids in both of these oils.

Which means you have to warm the oil to both create a beneficial hair mask and also to use it. A great recipe for using neem oil on your hair scalp easily consists of:

A top tip if you live in a cold climate where these oils solidify and are difficult to use, is to add a little bit of olive oil as well. Not only will it help to soften your creation, but it also contains a couple of the beneficial short-chain fatty acids we have already talked about.

Just be aware that as we have already mentioned, neem oil has a strong, pungent smell which some people don’t like. You can reduce the smell by adding a few drops of essential oil like lavender or sandalwood to your home-made nourishing hair mask.

Where To Buy Neem Oil

Neem can be bought online from general retailers like Amazon and eBay, as well as specialist alternative therapy and chemist websites. You can also usually buy it in supermarkets, along with the coconut oil you will also need.

The same rules apply to buying neem oil as they do for other types of oil that have health benefits, namely:

In terms of price, buying neem oil for hair and scalp conditioning is not expensive because you don’t need to use a lot.

In a major retailer like Amazon, you can get an 8oz bottle of neem oil for around $15, so it’s really not expensive as that much will last a long time, making neem an inexpensive experiment in improving the health of your skin and scalp.

Is It Worth Using Cocoa Butter For Hair Benefits?