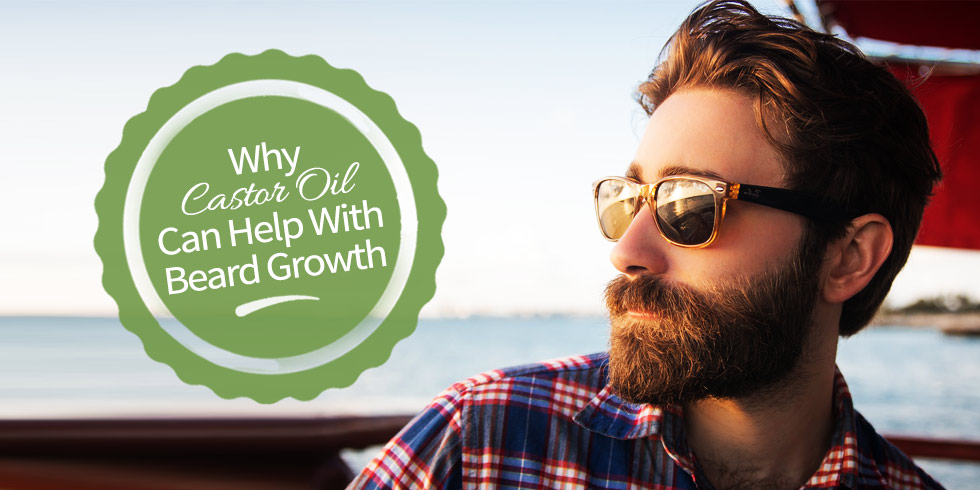 Castor oil has been used for thousands of years for improving the condition of the skin and hair. It was first grown and harvested in volume by the ancient Egyptians, with castor seeds even found in tombs dating back 4000 years, such was their reputation and value.

Castor oil is coldpressed from the seeds of the castor plant to form a rich oil. It is then applied in various ways to to the skin and hair, bringing many positive benefits.

With so many centuries of use and evidence of benefits, it’s actually quite surprisingly castor oil is so little known by modern men as something that can be used on a beard to improve its look, health and texture.

But now you know the secret, let’s discover exactly why  castor oil so good for your skin and hair, and how exactly can you use it to develop an incredible beard.

How To Use Castor Oil For Beard

Why Put Castor Oil On Your Beard?

It’s the composition of castor oil which makes it so good for the skin and hair. Specifically, it contains several monounsaturated fatty acids, especially ricinoleic acid, a rich 18-carbon fatty acid.

Specifically, the main composition of castor oil is:

In terms of the main acids and their benefits, castor oil contains the following:

Ricinoleic acid: Has antibacterial, antifungal and antimicrobial properties. This makes it excellent for keeping the hair follicles healthy. It also has the ability to improve circulation, with the increased blood flow and oxygen supply to the hair follicles and hair being beneficial.

Oleic acid: Used in many commercial skincare products, it has moisturizing properties. This is due to it being a highly absorbent in the skin.

Linoleic acid: This also has antibacterial and moisturizing properties. It is also used in many commercial products to address dry skin and hair.

Stearic acid: Is often using commercial hair care products because it can coat the hair and smooth it, without making it heavy or greasy. It’s also nourishing and can darken the look of hair, giving it richness.

So it’s the composition of castor oil that makes it great for nourishing the skin and hair. As it also has antibacterial and antifungal properties it can reduce inflammation and generally keep the hair follicles free of problems, which allows stronger hair to grow from them.

There is also some evidence that castor oil helps to improve the production of prostaglandins, which have been linked to the stimulation of stronger hair growth.

One misconception is that castor oil is a good moisturizer Some substances recommended for use on the skin and beard, for example coconut oil, are natural emollients. However, castor oil actually has an overall drying effect on the skin.

This is something to watch out for if you already have dry skin, and it may mean that a different type of oil might be better for you. If you suffer from acne or any other skin complaint, it’s recommended to do your own research, or speak to a dermatologist before using castor oil on your skin.

What Sort Of Castor Oil Is Best For Beard Health?

Which ever type of castor oil you choose, it should be:

Jamaican black castor oil is becoming more popular as a beard growth aid in modern times. The reason for this is not that it contains any more nutrients than standard yellow coldpressed castor oil, but because it is darker and thicker. This means that it darkens the hair when applied, making it look stronger and thicker when it is used as a dressing aid.

But in terms of the actual performance it can deliver to improving skin and hair follicle health, through nourishing and protecting the hair and skin, there is actually no difference between the different types of castor oil available.

You should look for the highest quality oil you can for the best price though. If you want to play it safe then buying some high-quality Jamaican black castor oil from a reputable outlet, or online through a major marketplace such as Amazon, is your best bet.

A top tip is to smell the castor oil if possible. If it doesn’t have a gentle nutty aroma then it isn’t proper castor oil.

How To Use Castor Oil On Your Beard

You might be wondering why you need to be told how to use castor oil on your beard. Surely it’s just a case of rubbing it into your hands and then slapping over your beard and face?

Well, that’s the easiest way to ending up in a greasy mess!

Castor oil is incredibly thick and rich. It is a very heavy oil and although a very small amount can have a positive effect on your hair and skin, if you apply to much it can have two quite negative effects:

So the key here is to just use a few drops at a time. Gently work the oil into your beard, and the underlying skin.

If you are using it as a beard treatment then you can leave it on overnight and shower in the morning, there’s no need to wash it off after a short space of time.

You can also apply it as a beard dressing, so if you were going out and wanted a darker and healthier looking beard, a very small amount rubbed through the hair will give you a great look.

So in terms of a routine using castor oil:

Although some people use castor oil on their beard daily, because of its richness, it’s probably best to start just using it once or twice a week to see how positive the benefits are.

How To Make Your Own Beard Oils

You can make things even better by creating your own beard oils, by mixing castor oil with other types of oil, which will act as a carrier oil to enhance the effect of the castor oil.

A great carrier oil is almond oil. Not only does it mix well with castor oil to create a blend that is easily absorbed, but it is packed with nutrients such as zinc and magnesium, which will further enhance the benefits of the created beard treatment.

Warm bowl in the microwave, put the ingredients in and blend gently.

You can substitute jojoba oil for the almond oil if you would like to try a slightly different variation, and you can experiment with other essential oils, for example swapping tea tree oil for eucalyptus oil.

As with the first example beard treatment recipe, warm a bowl in the microwave and mix the ingredients together gently.

There are lots of beard oil recipes you can try. One great thing you can do differently is to use coconut oil as the carrier oil. Coconut oil is very good for the skin and hair, and it could create your ultimate beard oil recipe.

The only thing to watch out for if using coconut oil as the carrier is that it can turn into a wax when it is cool. This will make it very difficult to apply to your beard and skin, so again, gently microwave a bowl and then put some of the recipe in and allow it to gently melt.

Discover The Benefits Of Castor Oil on Beard Health Today

Like many other natural beard treatments, castor oil is cheap to buy, easy to get hold of and simple to use.

As you have now seen, it carries a range of benefits for both the skin, hair follicles and the hair of the beard itself. Generally, it’s a great thing to add to your beard care routine.

The main thing to remember when using castor oil is to use it very sparingly, due to its richness and the drying ability it has on the skin.

But by getting hold of a range of essential oils and combining them with castor oil and a carrier oil such as coconut oil, olive oil, jojoba oil or almond oil, it’s really quick and easy to make a beard treatment oil that is far superior to the highly priced ones you can buy in the shops.

The Amazing Truth About Castor Oil For Eyebrows And Eyelashes

The Benefits Of Beard Butter And Why You Should Use It

What Is The Best Beard Shampoo For You?